My story is pretty typical. In my youth, I was always skinny despite having a terrible diet and little to no exercise. I got married in my early twenties and started gaining weight soon after.

Because the weight gain was so gradual, I didn’t really notice it. If someone, including my husband, would comment on it, I would get deeply offended because I still thought of myself as “skinny.” When I did think I was gaining weight, I’d do crazy yo-yo, crash diet type things that would make a small difference in the short term but I’d quickly fall off the wagon. Not only that, but I’d end up gaining more once I fell off the wagon. Once my older son was born, I became so particular about his diet in making sure he only ate healthy, organic foods and got lots of activity while my diet and activity levels kept going down. Exhausted after a full day of making sure my family was doing great, I ended up making really unhealthy food choices and it reflected in how I looked.

It was only about a year after I had my second son, that I woke up one morning and realized, OMG- something needs to change. At that point, I was almost 75 lbs over my ideal weight, a number I had last seen in my freshman year of University. I was eating a Snickers bar for breakfast- using nursing as an excuse, having at least one coke a day, and carbs were my best friend. I kept telling myself that I’m one of those people who don’t lose weight while they’re breastfeeding and wasted another 6 months using that as an excuse. I was overweight, unhappy, constantly feeling tired and lethargic and deeply, deeply self-conscious. I would always use the babies or my husband’s bodies to block mine in photos, and generally avoid taking photos altogether. I hated seeing how I looked in pictures, where there was no denying that I had gained so much weight.

In August 2016, I was attending a meeting at my son’s school when one of his teacher’s mentioned that she’d joined this small group personal facility called H4 Training right down the street from me, and that she was feeling amazing. It sounded really interesting but I was nervous. I kept telling myself that I had to lose some weight before I could start doing any kind of workout or I’d injure or embarrass myself- potentially both.

Finally- one morning in September, I decided, enough was enough. I had tried on a dress that fit me shortly after my son’s birth that was now tight and looked so unattractive. I felt tired even though I had slept 10 hours. I was winded just climbing up the stairs. I called the gym that morning, and asked if I could come for my fitness assessment that day. I was so scared to go to that assessment. I didn’t want to embarrass myself. I felt frumpy, didn’t have proper workout clothes or shoes, and I almost cancelled 5 times before that appointment. But I made it and I want to tell you- it was one of the best decisions I have EVER made in my life. I could barely do a single jumping jack during my assessment and they didn’t make me feel bad about it at all. They focused on what I COULD do and told me that if I stuck to it, I could do a lot more. They gave me the courage and the motivation to come back- and this glimmer of hope that there was a way back to being healthy, active and more importantly.

I started going to H4 twice a week and it was great, but I also realized that I needed something more to keep the momentum going. I decided to start walking with my son. The first time I went for a walk, I barely walked a 1/2 mile circuit and I felt exhausted. When my feet starting hurting, I went and got fitted for proper walking/running shoes at Dick Pond Athletics. I started walking every single day and it started feeling really good. I also did some research and found out that my health insurance covered a Nutritionist under their Obesity Prevention Program and I hired a nutritionist. I did a blood work and found out that despite everything, I am actually very healthy with no concerns regarding my thyroid, blood sugar and blood pressure. I had always harbored this fear that something was wrong and this gave me even more hope that I could change. I started doing the Couch2-5K program and did something I never thought I’d ever do- I started running 3 days a week. I was running 4-5 Fitbit Challenges and knocking them out of the park. No one could touch my step count.

I was making AMAZING progress and then, on December 1st, I was rear-ended while stopped at a red light with my sons. It was terrifying. We all had to go to the hospital to get checked out. Thankfully, both the boys were fine because they’d been properly restrained in their car seats. However, I suffered some serious back pain. It was SO demoralizing to take a month off from working out, from running, even walking hurt. I was flattened. I had been making such amazing progress and all of a sudden, I had to stop. It was the hardest, because for me, being active came before focusing on my food.

It took me a week and a half and gaining 2 lbs to realize that even if I couldn’t exercise, I could eat healthy. I started researching the science behind weight loss and discovered that diet is 80% of weight-loss and while activity can help maintain that weight-loss, they both have to work together to get results. it’s been about 3 months since the accident and I’ve had some setbacks but for the first time, I didn’t give up. I’ve kept going and even though my progress is slower than when I first started, it’s there. Since August 2016, I’ve lost 33 lbs and I’m just 2 lbs away from the big 35.

I never thought I’d get here but I have. My only regret is that I waited this long to start. If you’re struggling with being overweight and unhappy, don’t wait. Take that first step towards getting healthy. Whether it’s throwing away all the junk food in your home, or going for that first walk, even if its super short, it’s taking that first step that’s the hardest. I’m a mom of 2 kids with a husband who travels 4 days a week. I have used EVERY SINGLE EXCUSE in the book but as they say, there will always be a million excuses to not do something- but if you really want something, you will make it happen. Make the change for YOU. Do it for YOU- so that you’re happy and confident and strong.

Change is hard but it is possible. I look at my before and after pictures and I see the proof of that. It has been a difficult and grueling journey but it has also made me realize how strong I am, that I can keep going when the odds are stacked against me and that weight-loss and getting healthy is not some mythical concept but an attainable reality.

Stronger. Leaner. Faster.
Don’t stop until you get there! 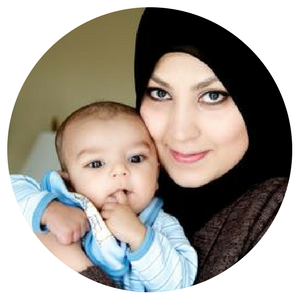 Learn More About Me!